Key West is known as a colorful, artsy community. Sometimes inspiration comes from an unexpected source- like the well known, Key West mascot, the Rooster.  This is absolutely Cock-a-Doodle True! The familiar bird walks freely on our island and is, in fact, recognized as a protected creature in annuls of the Key West law books.  This is absolutely Cock-a-Doodle True! 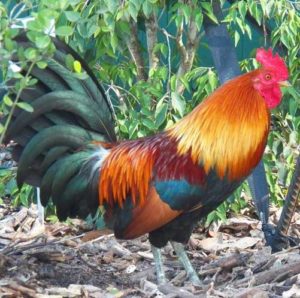 Mere poultry commodities in other areas of the country, images of our proud feathered fowl are commonly displayed on artist’s canvases, trendy clothing, coffee mugs and magnets all over town. So what is the attraction? Why would jewelry maker, Pandora, create an exclusive, sterling silver rooster charm found only in Key West?

Put aside your traditional notions of barnyard chickens and learn why the “Key West Gypsy Chicken” variety is both celebrated and distained. 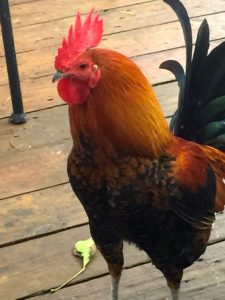 The colorful breed’s beginning on the island coincides with the arrival of Cuban citizens moving to the neighboring island to the North in 1860’s. Along with their belongings, they brought their prized Cubalaya roosters, bred in Cuba for their size and aggressiveness, specifically for the popular sport of cock fighting.

The often violent sport was common in Key West for decades as the island’s reputation as a wild and uninhibited place was established. Ernest Hemingway, in his Key West days, was known to frequent the lively, widely held fights. 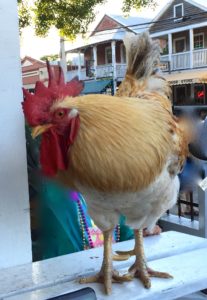 Before long, the chicken population boomed, much to the dismay of the proprietors of luxury tourist accommodations. The free range birds are known to practice their signature crowing at all hours of the day and night, roost in trees above unsuspecting passersby at dusk, and generally “rule the roost” all over town. 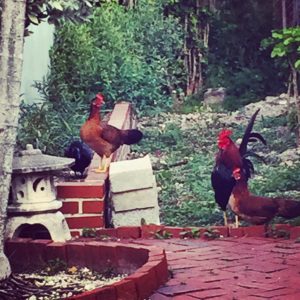 The chicken predicament caused the hiring of a chicken catcher in 2004 that trapped and relocated hundreds of birds up the keys. But the cherished chickens continued to have many supporters on the island, and after much opposition, the position was discontinued.

Today, our fine feathered friends continue to add color and personality to Key West. They cause you to pause and admire their beauty and tenacity as they frequently stop traffic to cross the road. Truly a symbol of the Key West way of life, they are free birds.