The Schooner Wharf Bar presents its original New Year’s Eve tradition, the “Lowering of the Pirate Wench” from a 100-foot high mast of the tall ship Halie and Mathew docked in front of the popular waterfront watering hole.

The crew will lower the pirate wench, Evalena Worthington, co-owner of Schooner Wharf, against large illuminated countdown numbers until the stroke of midnight where “2010” will light up to launch the new decade.

The fun starts early with live music from Michael McCloud and Friends, followed by island rhythms and steel drums of Toko Irie and Yban Agbo, and then from 10:00 pm till late party with the funk of Biscuit Miller and the Mix. 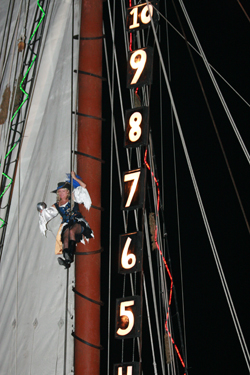